skip to main | skip to sidebar

This is typical of the press's reaction to McEnany's comments on schools reopening:

But the press is just jumping on just one part of her full statement.

The study McEneny referenced purported to show that infected kids had a mild response to COVID-19, comparable to everyday flu.
A smart follow up question would have been:  "Maybe, but how does that affect the concern that kids could take the infection home to more vulnerable adults?"

Let's hope follow up articles are on the lines of "Here's the study the Trump administration is relying on to support its policy", along with an analysis of the quality of the study, whether later events called it into question, and so whether the administration is justified in basing policy on it. i.e. responsible journalism.

The New Yorker piles on. 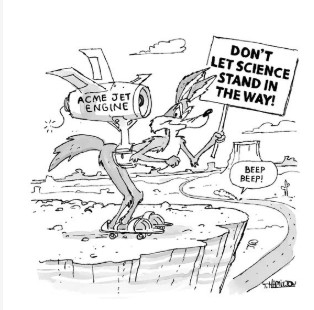 How To Pay For News

I've been thinking about how internet news sites could monetize their services to provide income to meet the expense of news gathering.Paywalls are one way - monthly subscriptions,  just like print newspapers.  But what if I don't want to pay a fairly substantial annual amount for a lot of content (sports, etc) I'm not interested in?  I would prefer to pay for just those posts I really want to read.The obvious answer is micropayments - paying a small sum, perhaps even just one or two cents (or even a fraction of a cent) per click.  I would be willing to pay for my news and commentary if it were so priced.  But what would be the billing mechanism for such small sums?I think of how I pay for public transportation here in the San Francisco Bay Area.  I have a Clipper Card which I can use to pay for a ride on any of the 22 transport agencies (buses, trains, ferries) in the area.  My Clipper Card account is linked to my credit card, and is automatically refreshed when my balance runs low.I visit  many websites in search of information.  I am thinking that news and opinion websites could form a payment consortium:  I could buy website clicks ahead of time from the group operation, and for each click I made on a website, the owner of the site would be credited with the click fee, and it would be deducted from my balance.  As my balance got close to zero, my balance could be topped up from my credit card.  That way, I'd be paying only for what I wanted to read, it wouldn't be a burdensome expense, and the news organizations would be getting an income.  Perhaps not as much per reader as they would through a paywall, but with more readers, the micro payments could add up to approximate the paywall income.Just a thought...

“Our job is to make sure the court is ready — the surface is flat, the lines painted, the net at the correct height,” Clegg said. “But we don’t pick up a racket and start playing. How the players play the game is up to them, not us.”

Er — no.  How the players play the game is up to the referees, who ensure that the rules are followed and that the game is played fairly.
It’s okay for FB to make the tennis court analogy.  They only need to complete it by supplying the needed impartial referees.
Posted by John Quick at 2:15 PM No comments:

Not only did the president ask a foreign government to intervene in a presidential election by digging up dirt on a political opponent, .............Mr. Trump appears to have used hundreds of millions of dollars in military assistance to pressure a foreign leader to act as the head of his opposition-research unit.


Note the expression "digging up dirt".  This same expression has been used multiple times by multiple news outlets.  The implication is that there is "dirt" to be found, and the constant repetition can only condition readers and viewers - i.e. voters - to believe that somehow Joe Biden is guilty of some unnamed corruption.  This mindless spreading of a false trope is, I'm afraid, rather typical of our uncritical press.

How should the NYT and others described the request from DJT to Zelensky?  How about something along these lines:

Not only did the president ask a foreign government to intervene in a presidential election by looking into alleged corruption by Mr. Joe Biden and his son Mr. Hunter Biden (allegations that have long been debunked) ...................Mr. Trump appears to have used hundreds of millions of dollars in military assistance to pressure a foreign leader to act as the head of his opposition-research unit.

See how easy it is to provide good information to readers, rather than mindlessly spreading Trump's propaganda?
Posted by John Quick at 9:33 AM No comments:

Where's the Sense of Urgency?

Our press is (once again) falling down on the job - in this case failing to warn the public of how imminent the tipping point for runaway global warning is.

One idea for keeping the subject in the public eye:
A prominently displayed daily update on the current CO2 ppm count, the ppm count expected to cause 1.5⁰ warming, and estimated time to reach that level given present rate of increase.  Along with a reminder of predicted effects of 1.5⁰ warming.

A black box with this info on page 1 of daily newspapers, and a few seconds in every TV news broadcast, would be the minimum the press should be doing.

The Guardian is doing its bit. 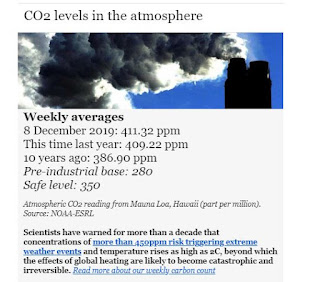 Posted by John Quick at 4:15 PM No comments:

While it's clear that Russia supported Trump in the 2016 campaign, it's less clear just how effective Russia's aid was.

Soon after the election, news orgs should have run a poll of Trump voters along the following lines:

Which of these reports about Hillary Clinton did you read/hear?
Followed by a list of false statements about HRC put out by Russian disnfo


Were those reports you read/heard about Hillary Clinton the main factor in your decision to vote for Donald Trump?

A poll like this would at least be a start in gauging the effect of Russian interference in the 2016 election.  This long after the election, results would be fuzzier than if news orgs had been on the ball at the right time.

Posted by John Quick at 1:11 PM No comments:

So Donna Brazile is joining Fox News as a regular contributor.

A smart move by Fox. Let's recall: while Brazile was DNC chairwoman, she was also a regular on CNN. While at CNN, she learnt of at least one question that would be posed to HRC at an upcoming presidential campaign debate, and sent the question on to HRC. A clear breach of trust on Brazile's part.

Fox News knows its audience is well aware of this bad move by Brazile, is hostile to her, and so is primed to dismiss anything she has to say. Yet Fox can cynically claim to be "fair and balanced" because it is hiring such a high profile Democrat.

A perversely brilliant move on Fox's part.
Posted by John Quick at 2:30 AM No comments: